Nkazimulo “Zulu Boy” Zulu puts his EFC Flyweight Championship on the line when he takes on Gary “Relentless” Joshua. Zulu Boy is an explosive finisher and with his kickboxing background is able to finish off his opponents with high level striking. Out of his 9 wins, 6 have been via KO/TKO.

Gary “Relentless” Joshua is a star in the making – he has 4 victories in 4 fights and if the records are to be believed he has not lost a fight at amateur level. “Relentless” does not give up and is known for his grit and determination. His ground game is his strength, thanks to a solid background in Jiu-Jujitsu, and with each bout he is evolving as a fighter.

Prediction: This is the fight of the night. Zulu Boy is the favourite and his experience should get him the victory – but if Joshua can get through the first rounds, he might just cause an upset to take home the EFC Flyweight Championship.

The co-main event is for the interim bantamweight title between Luthando “Shorty” Biko and Callum “Pacino” Ellenor from England.

Biko is a world class Judo exponent and extremely strong to boot. Biko’s most famous victory came this year against Steve Goncalves and despite his height deficit, he has shown, time and time again, in his short EFC career, that he is hear to stay. In his 5 fights he has had 4 wins and 1 loss.

Ellenor has just one loss in his 8 professional fights. He has a big height and reach advantage over his opponent and is known for his good boxing ability backed up with some skillful submissions.

Prediction: Another tight contest which is close to call. Expect Ellenor to take the win thanks to his experience, reach and height advantage.

Other fights on the card: 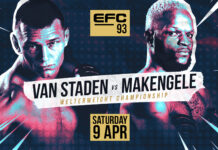 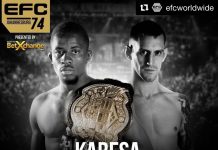