The biggest event of the summer is about to kick off in Paris, as the women will battle for the highest honour in football. This year’s competition is likely to be the most competitive yet, with Germany, France, England and the USA all among the hopefuls who will be looking to be celebrating after the final on the 7th of July. But who are the leading teams that punters should be keeping an eye on?

The host nation will kick off the tournament on Friday as they take on South Korea. This should be a tricky match, and the Korean’s are widely tipped to be one of the dark horse horses in the competition. However, the French should comprehensively ensure their passage through to the next round over the course of their Group A fixtures. They will also be up against Norway and Japan. 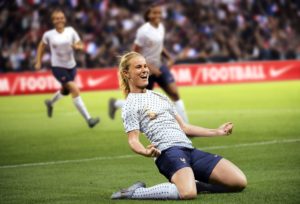 There will be a sense of expectancy on the host nation following the men’s success last year, and they will be led by one of the best players in the world in the form of Lyon’s Amandine Henry. She has won every domestic honour available to her, but she will see this as her greatest challenge. The French are currently judged as the fourth-best team in the world but they will likely face a stiff route to the final having to possibly play the USA in the quarterfinals, and the US will ultimately knock them out. That being said, the growth of the sport in the country will be soaring after the summer.

Tip: France to be knocked out in Quarterfinals at 17.75 with BetXChange.

The reigning champions and top-rated team in the competition will once again be the team to beat. They have won three of the last four World Cup’s and hold an unparalleled monopoly on the women’s game. Julie Ertz will be the star for the US as she is a commanding figure in the middle of the midfield that controls the game throughout the 90 minutes, while also popping up with vital goals for her country.

The American’s have been handed a tricky looking group, as they will come up against the always dangerous Sweden, Thailand and Chile. However, the USA should safely navigate their passage to the next round having won their last ten fixtures that stretch back to late last year.

Tip: USA to win the World Cup at 3.25 with BetXChange.

No matter whether it is the men’s or women’s game; the German’s are always potential challengers. The knack that they have to come alive in knockout football is a quality that no other football nation can boast. They have qualified for every World Cup since the competition began. Germany enjoyed a fine qualifying campaign. After losing their opening fixture against Iceland, they won the next seven fixtures and didn’t concede a single goal. Their star player is expected to be Dzsenifer Marozsán, who can score from virtually anywhere on the field, and should she have a good tournament then the trophy isn’t going to be far away.

They shouldn’t have many challenges in the group stage and should easily overcome South Africa, Spain and China. Germany will be looking to find their best form in major tournaments again having lost their European crown last time out for the first time since 1995.

Tip: Germany to win the World Cup at 5.25 with BetXChange.

It has been a famous few years for the Three Lions, and the women will be hoping that they can continue the feel-good mood in the country with a positive showing in the World Cup. The Lionesses won the SheBelieves Cup earlier this year after beating the USA in the final and will be looking to avenge their cruel knockout at the hands of Japan in the semi-finals of the 2015 World Cup. 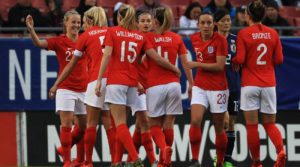 The team will be managed by former player Phil Neville and will begin the competition ranked third in the world. They qualified for the competition emphatically by scoring 29 goals and only conceding one. England are in one of the most attractive groups on paper, as they will come up against Argentina, Scotland and Japan. They should safely get through, and should confidence be high within the camp then they could win the whole thing.

Tip: England to win the World Cup at 6.25 with BetXChange.