Germany crash out of World Cup group stage after defeat to South Korea.

In Brazil four years ago Germany struggled to get the balance right between attack and defence until the quarter-final. This time they never quite did and now they are out. 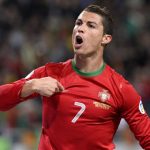