The biggest race day on the calendar in South Africa takes place this Saturday, as the 2022 renewal of the Durban July is staged at Greyville Racecourse. The field will compete over a total distance of 2200 meters, with a purse of R5 million up for grabs.

The BetXchange betting markets for the Durban July 2022 have been open for a long time now, and there are a number of interesting promotions that customers can take advantage of across the compelling weekend of action. At present, we have joint-favorites at the top of the Durban July betting, with both Linebacker and Safe Passage priced up at 9/2.

They are followed in the betting by Pomp and Power, who is a 7/1 chance, while Aragosta is a 9/1 shot. Do It Again is the shortest of the previous winners at 12/1, while Kommetdieding and Belagrion are 15/1 and 33/1, respectively.

Linebacker, trained by Vaughan Marshall, will have Grant van Niekerk on board this weekend. He will carry 58.5kg this weekend, but we find enough reasons to take him on in the Durban July. Linebacker was second in the 2021 renewal of the race, but has largely been disappointing since that start.

He did get back to somewhere near his best level in the G1 Gold Challenge in June when second behind Al Muthana, but a low draw coupled with the fact that he has been beaten by Kommetdieding and Jet Dark already this year means that we see him as a vulnerable favourite.

Out of the two at the top of the betting, Safe Passage certainly looks the most likely to improve. This three-year-old has already won the Daily News 2000 and Gauteng Guineas this year, and his second in the SA Classic remains extremely solid form.

He looked excellent during the public gallops earlier this week, and while 54.5kg may be a slightly heft weight for a three-year-old, there are clear pluses surrounding his chances this weekend. The fact that two three-year-olds in the previous four years have won this race gives him every chance.

Justin Snaith has won three of the previous four editions of the Durban July, which means support for Pomp and Power this weekend is certainly merited. The four-year-old enjoyed an excellent year in 2021, which included wins in the G2 Concorde Cup and G1 Cape Derby.

He is yet to really hit the same kind of form this year, and was beaten by Safe Passage in the G1 Daily News 2000 back in May at Greyville. He carried slightly less weight than his rival this weekend, and that could be a difference-maker for a dominant trainer in this race.

We mentioned a few dark horses in a previous post for the Price Boost special offered at BetXchange for the race this weekend. One horse that we remain very keen on is Hoedspruit for Justin Snaith. He is from a former Durban July winner, and has been campaigned throughout the season with this race in mind.

He has made just three starts, and was well-held on his latest start. However, we believe that he remains extremely well-handicapped and there could be more to come. The only slight concern is the draw in three.

We have been very keen on Kommetdieding from a very early stage, and there has been nothing we have seen to put us off the four-year-old trained by Crawford & Rix. He has a good draw in 13, and that is a bonus after he powered home from a wider draw in the race 12 months ago.

His form on track has been solid, with a second in the Queen’s Plate and a win in the Met. He looks a much bigger horse coming into the race this year, and that looks perfect for the 60kg that he will be carrying on his back.

Pick: Kommetdieding at 15/1 with BetXchange. 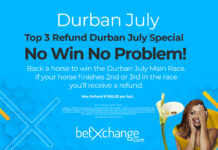 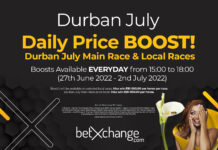 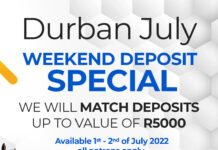 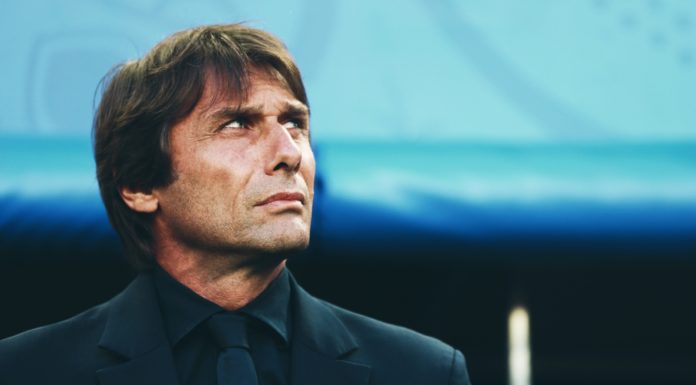